“If it looks like duck and quacks like a duck, it must be a duck”. How many times have you heard that saying? And have you ever really watched a duck? Outwardly, they appear calm, collected and generally unflappable. They even don’t mind spending time with their heads and upper body under water, tail in air searching for snacks. What you don’t see though, is the feverish pace their feet move to keep going. 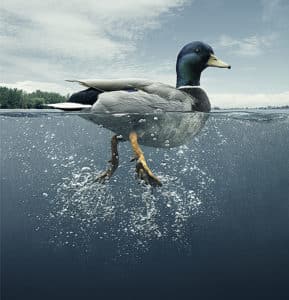 If you think about it though, some people are like ducks. Outwardly calm, but inwardly churning and working hard to get the job done. I’ve been told that I am always the calmest person in the room when there is a problem. I’m glad it appears that way to others, but underneath the surface my mind is paddling wildly like a duck’s feet. I am searching for the solution to keep moving forward, and I can’t stop paddling until I find it. When this happens, it’s hard to pause, thus my impatience for circular conversations. Don’t get me wrong, I am present and paying attention to the conversation or tasks that I am doing, but my mind is churning in the background working the problem.

An old friend from high school days used to get annoyed at me for always being calm. She told me I rarely expressed my emotions, that I was always neutral and never appeared to have highs and lows in my life. My response was almost always a sarcastic “no one cares!”. I know that is not true, and most folks do care, but I didn’t see the point in complaining.  I just wanted to solve the problem and move forward. I’ve been thinking about this a lot recently and regardless of the situation (work or personal), isn’t better to be calm rather than excitable in trying times?

We recently celebrated our 20th anniversary (next year we can legally have cocktails 😊); it’s an amazing accomplishment. But we know that this milestone would not have been possible without the hard work and leadership our team shows daily.  We all work hard together to be the voice of calm when there are issues since it’s that calm voice in the room that leads to clear thinking and solutions. The solutions help our clients, consultants, and even vendors achieve their goals.

Emotions have their time and place, but when you have a problem, wouldn’t you rather be the calm voice in the room that leads the team to solutions, rather than the voice that sees only the problems? In other words, isn’t it better to be a duck than to act like a chicken that lost its head?

Have a good weekend.